All school search, finder, or match results, as well as colleges and universities displayed as "Featured School(s)" or "Sponsored Content" are advertisers that compensate us for placement on this site. The resources, editorial content, and school evaluations published on this site are developed independent of the schools that advertise here.

Whether they’re at the bedside, in the boardroom, in the classroom, or doing cutting-edge research in emerging areas, MSN-educated clinicians along with leaders and specialists working outside of direct patient care are at the top of the profession. That fact also places them on the top rungs of the salary ladder.

The MSN can be best viewed as the gateway to the top positions in the field and the handsome salaries those positions come with. It represents the level of education where nurses expand upon their skillset, specialize, become leaders and changemakers, and gain the tools needed to revolutionize healthcare.

According to the American Association of Colleges of Nursing (AACN), “More education brings more opportunity, and many doors are open to nurses with master’s degrees.” That means whether your goal is to specialize in a field of advanced practice nursing, move into an administrative or leadership role, or transition to an area like research, informatics, or education, the MSN will get you where you want to be. The MSN is your ticket to outstanding professional opportunities, greater personal fulfillment, and, of course, those coveted six-figure salaries. 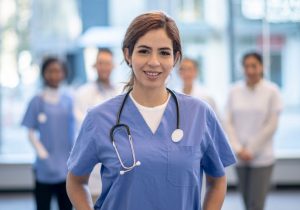 A 2019 Medscape APRN report provides a clear picture of the earning power of today’s APRNs. As of 2018, these advanced practice clinicians earned an annual, average salary of $117,000. The average salary among those who broke away from physician-led practices and ran their own practice increased to $128,000.

Medscape reported that about 79% of all APRNs worked with a collaborating physician and/or under a collaborative agreement, while just 21% worked independently. Currently, 28 states grant full practice authority to APRNs; a fact that opens the door to opportunities to own and build your own practice and specialize in serving a particular patient population.

Of course, seasoned APRNs have more earning power than their less-experienced colleagues:

And earning power can and does vary according to geography, which falls largely in line with cost of living differences:

According to the American Association of Nurse Practitioners (AANP), there were more than 290,000 nurse practitioners licensed in the U.S. as of December 2019, making them the largest group of APRNs in the nation.

The AANP notes that while salaries for NPs vary based on the type of certification (family, adult, adult-gerontology, pediatrics, etc.), experience level, education level, and more, a 2019 sample survey found that the median salary for full-time NPs was $110,000. When bonuses were considered, this figure rose to $115,000.

According to the AANP, the highest earners here, with a median base salary of $125,000, were certified in psychiatric mental health, while emergency NPs posted the highest median hourly rate, at $70/hour.

The Medscape report revealed a slightly lower annual salary of $108,000 for NPs. However, the report showed higher average salaries among NPs in hospitals/in-patient care, at $116,000, and in hospital-based outpatient settings/clinics, at $109,000. And among NPs who ran their own practices, the average salary rose to $112,000.

The Medscape report found that average salaries varied according to advanced practice certification:

The Medscape report also found that hourly NPs earned slightly more annually than their salary-based colleagues: $109,000 vs. $108,000, which is likely due to overtime pay.

As expected, geographical location often plays a part in the earning power of NPs. The highest earning NPs are in the Pacific region (including Alaska and Hawaii), with an average annual salary of $125,000, followed by:

According to the 2019 Medscape report, clinical nurse specialists (CNS) earned an average, annual salary of $102,000, although those who were paid hourly earned more, at $106,000, largely due to overtime pay.

The largest percentage of CNSs (37%) worked in hospitals, followed by hospital-based clinics (17%), and faculty/research (15%), and about three-quarters worked in a full-time capacity.

The highest-paid CNSs worked in suburban settings, earning an average, annual salary of $104,000, followed closely by those in urban settings, who earned $103,000.

Certified registered nurse anesthetists (CRNA) lead the pack when it comes to earning potential, which comes as little surprise, given that they practice with a great deal of autonomy and in every setting where anesthesia is delivered, including dentists’ offices, plastic surgeons, pain management clinics, delivery rooms, surgical centers, and more.

The American Association of Nurse Anesthetists (AANA) reported a median salary of $166,540 for these nursing professionals in their 2018 AANA Compensation and Benefits Survey.

The 2019 Medscape report revealed an even higher annual salary, at $188,000. Hourly CRNAs earned slightly more at this time, at $189,000, largely due to overtime pay. Part-time CRNAs reported an average hourly wage of $111.

Unlike other APRNs that showed little difference in earning potential between those that held an MSN vs. a DNP, CRNAs holding a DNP reported an annual salary of $195,000, while those holding the MSN earned $188,000.

Medscape also reported an annual salary of $185,000 for CRNAs working in urban areas and $182,000 for those working in suburban areas.

According to the 2019 Medscape report, certified nurse-midwives (CNMs) earned an average, annual salary of $107,000 as of 2018. The majority of CNMs (28%) worked in hospitals, followed by 21% in hospital outpatient settings/clinics. 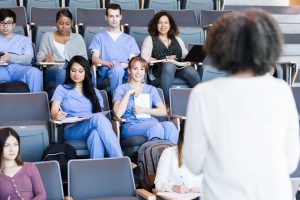 While the majority of MSN-prepared nurses serve in advanced practice nursing roles, a growing number of high-paying careers outside of the clinical environment require the MSN.

Of course, experience also plays a large part in the earning potential among nurse informaticists:

Holding positions like chief nursing officer, chief nursing executive, director, and consultant, nurse administrators are among some of the highest paid nursing professionals. According to the American Organization for Nursing Leadership’s (AONL) 2019 Salary and Compensation Study for Nurse Leaders, the highest percentage of administrators (35%) held the title of director, followed by manager (21%), and CNO/CNE (18%).

The largest percentage of administrators (39%) worked in acute care hospitals, followed by 27% in academic institutions. Most administrators (67%) have been working in nursing for more than 20 years.

The highest earning administrators and leaders according to geographical area were located in Region 9 (AK, CA, HI, NV, OR and WA), with 69% reporting earning $150,000 or more.

As expected, bonuses and other financial incentives are commonplace in nursing leadership roles. The AONL report found that 70% of all respondents were eligible for an incentive or bonus award. Of those, 61% actually received an incentive or bonus in 2018. The largest number of administrators and leaders (24%) reported a bonus equal to between 10 and 20% of their base salary.

Nurse educators remain some of the most highly sought after nursing professionals. According to an AACN report on 2018-2019 Enrollment and Graduations in Baccalaureate and Graduate Programs in Nursing, U.S. nursing schools turned away more than 75,000 qualified applicants bachelor’s and graduate nursing programs due to a lack of faculty, clinical sites, classroom space, clinical preceptors, and budget constraints, with most nursing schools reporting a faculty shortages as their reason.

According to the Bureau of Labor Statistics (BLS), post-secondary nursing instructors and teachers earned an annual salary of $74,600 as of May 2019. The highest earners brought home an average salary of $133,460 during this time.

Salaries for nursing instructors tend to vary according to the setting in which they work:

According to the BLS, the top-paying states for nursing educators include: